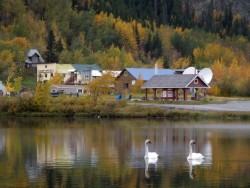 Chitina sprang up with a boom from 1908 to 1915. It once boasted that it had the finest accommodations north of Seattle…Breedman’s Hotel Chitina.

It was a transportation “hub” connecting the Kennicott copper mine with Seattle smelters via train from Kennicott to Cordova; then barge to Seattle.  It also connected to Fairbanks via road.  The railroad arrived in 1910 and Chitina thrived until 1938 when the railroad pulled out. It quickly became a ghost town, and eventually even had ‘ghosts’ painted on several of the abandoned buildings. Work is currently underway to have Chitina declared an historical district.  It is a treasure trove of old buildings, cars, and stories.

Chitina is at the confluence of the Copper and Chitina Rivers.  It is a hot spot for Alaskan dip-net fishing for the world re-known Copper River Red Salmon.  It is also along the road into the Wrangell-St. Elias National Park… the largest park in the nation, containing five of the ten largest peaks in the nation.  The road into the park is gravel and a slow drive; so many choose to overnight in Chitina.

Hotel Hours
7am to 10pm daily
June 1 to September 7

Our Restaurant will be closed to the general public during the 2021 season. We will have a customized menu for our hotel guest daily.