A Must See!  A classic “frontier town” building in an area steeped in history.  It has been renovated and restored to an early 1900’s Arts and Crafts era décor and re-opened with 17 rooms, (all with private bathrooms) and a full service restaurant. The building is the first in line of three, 2-story structures along the main street in “downtown” Chitina.  It is constructed from  Douglas Fir by expert craftsman.  The nearly century old wood of the building has been painstakingly restored to its former glory yet leaving some of the marks of the people from the past. 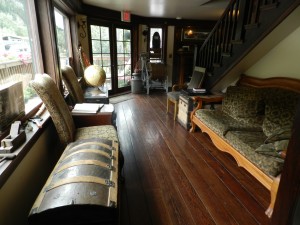 The original portion of the building was built in 1914 as the Arctic Brotherhood Hall — the predecessors to the Pioneers of Alaska.  It was used as a community hall and later a theatre for moving pictures.  There was originally a “peanut gallery” around the inside perimeter, and the public restroom and kitchen service area was the stage.  It was converted to a hotel and restaurant in the 1950’s.  It ran thru pipeline construction days and In the late 1970’s it closed.   It lay vacant for almost three decades, until now…

The Gilpatrick’s purchased the old hotel and old saloon  in the early part of this century and built the addition that hooks the two buildings together.  The buildings re-opened in 2006 for public rest and recreation. 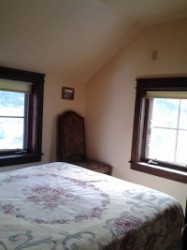 The main floor houses the kitchen, restaurant, lobby, and saloon. The top floor of the building houses the sleeping rooms.  The layout is much the same as it was in the 1950’s. Our rooms are still in the old style…small and cozy.  But they have been updated to provide private bathrooms and queen-sized beds.  The lower floor has rental showers and six more rooms including a handicap accessible room.